Human language is extraordinarily economical. We can say an extraordinary amount in very few well chosen words. This economy is essential to its function. Language is what in computer science is called a soft real-time system. That is, you have a limited amount of time in which to convey your meaning. After that, your audience will get bored or go to sleep, or the event you wished to discuss or avoid will have taken place. The night will have come without the fire being built. The deer will have fled without the arrow being loosed from the string.

Language is built for speed, not for precision. This is why legal documents such as contracts or statutes are so bizarrely complex and pedantic. Much rides on any dispute about the meaning of a statute or contract, and ordinary language — the way ordinary people speak — sacrifices that kind of precision for speed. Even so, statutes and contracts seldom succeed in achieving perfect clarity, which is why there is such frequent recourse to the courts and why the corpus of laws, decisions, and precedents is so mind bogglingly large.

Language is also built for economy of vocabulary. We don’t have one word for one thing. Most of the time, we use a handful of words in different combinations to point roughly at the thing we want to say, hoping or assuming that the person we are talking to has enough common points of reference with us that they will select the correct meaning of those words out of all the possible meanings that are available. (The charge of the light brigade was caused by two different commanders being able to see two different gun emplacements from their different vantage points. Neither could see the ambiguity. And in battle, communication has to work in real time.) 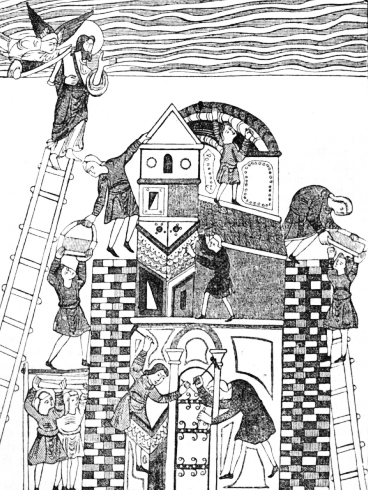 So, a typical English speaker knows only 2% to 4% of the language. But that is not even the best bit. According to lingholic.com:

So, one thousandth of the language will cover you for approximately 90% of what you need. That is an extraordinary economy. And it is a good thing, too, because if we needed to learn a million words, I don’t think we would ever get much said.

And of course, if you did need to learn those million words, how would you learn them? You could attempt to learn them all by direct observation, the way a child learns to speak by observing its parents speech, but our ability to do that declines as we age, and for the most part, we would have to learn our million words from a dictionary (though good luck finding one that listed even a quarter of them). And how would the dictionary explain those words? By using sentences made up of other words.

Most of the words in the language, therefore, are shortcuts for ideas that can equally be expressed in stories made up of more familiar words. (You may have to look things up iteratively until you get to definitions made up entirely of words you already know.)

There is a contest between two forms of economy here. More shortcut words can allow you to say something more quickly and with more precision. That is particularly important in a high-stakes real-time field like medicine. But having to learn all those shortcut words is tedious, and it only works if the person you are talking to knows the same shortcut words. No one learns medical jargon overnight.

For the most part, then, the economy of language consists of getting a lot of mileage out of about 1000 words. And since we have way more than 1000 things to talk about, we communicate by combining that basic vocabulary to tell stories.

The way we tell stories is also part of the economy of language. We tell stories by making references, sometimes tacit, sometimes explicit, to other stories that we assume our interlocutor knows. Again, this is necessary to the real time performance of language, since explaining all the sub-stories would take too long, and would often involve field trips.

Communicating in this way is so fundamental to how language works that we are often not conscious that there is a complex story behind the words we choose and the way we put them together. (The economy of language demands that we produce these words without the effort that would be required to analyse their full implications.)

This reliance on known stories effectively divides our communication up into different domains of discourse. We use our same 1000 words to tell stories that evoke other stories. But people in different parts of our lives have very different sets of stories. We use the same 1000 words, plus a few specific to each domain, as we go from home to office to club to playing field to bar to convention to forum, more or less unconsciously switching between domains as we go.

The economy of language depends on this division of discourse into separate domains, and even into sub and sub-sub domains. Thus the domain of computer programming has sub-domains for different architectures and sub-sub domains for different programming languages used in those architectures. Across all there is a common vocabulary, but that vocabulary evokes a different set of shared stories in each domain.

All of this is necessary to make language reasonably real time. Without the shorthands that we can rely on when we speak to others in a particular domain, it would take far too long to say anything meaningful. But it makes communication between domains difficult.

At the heart of the difficulty, of course, is that you don’t know all the stories in a domain that is not familiar to you, so you don’t recognize when those stories are being invoked.

This would be bad enough if you always recognized when it was happening. But because the economy of language relies on limiting vocabulary, and only a few domains have an extensive specialized vocabulary that is distinct from that of other domains you are familiar with, the language of the foreign domain will often evoke a set of stories for you from one of the domains you are familiar with. Thus you misunderstand without any indication that misunderstanding has taken place.

The language — the stories — of different domains often exist because one domain needs to make a distinction between two ideas that don’t need to be distinguished in another. Thus they use common vocabulary in a way that is understood within the domain to make that distinction, but this gives no sign that a distinction is being made to anyone outside the domain.

If I am from outside your domain, I have no knowledge that such a distinction exists or is important. And because domain boundaries are not painted on the ground, but arise only because such distinctions need to be made, I often can’t tell that I am in a different domain where my current understanding of a particular word does not apply. The result, almost always, is a dispute about what the word “means”.

Such disputes, it seems, are stubbornly resistant to either party recognizing that they are talking from the perspective of a different domain. Part of the economy of language is that we switch between the domains we commonly work in without conscious thought. We are not adept at recognizing domain boundaries. We cross them without thought or recognition, which is fine until we cross into one we don’t belong to. Or, more often, we are shouting across domain boundaries without either party recognizing that the boundary exists, each believing that the other simply does not understand the domain they are in.

Add to this our common prejudice that our own domains are more important, more rigorous, and better thought out, and our inherent inability to think about things in a domain we don’t belong to  — since we don’t know all the stories — and it is not surprising that we tend to nail our colors to the mast and fight to the last hand for our definition of a disputed word.

This is the price we pay for the economy of language, for the ability of language to allow us to communicate in real time.

It is also the doom of many efforts to improve communication within a domain or between a domain and the outside world by fixing a vocabulary. Domains are essentially fractal, even in a profession with a common name, shades of practice and of values create sub-domains, and for the reasons that domain boundaries are hard to see, sub-domain boundaries are often harder still to see, and thus lead to the most bitter taxonomic conflicts.

This bitterness only redoubles the feeling that something must be done to nail down the language, but as long as the fractal subdomains remain unresolved and undetected, such efforts only lead to more disputes. It is a vicious circle, and one that you can see played out in many professions. (I am confident that my readers don’t need me to name names.)

Domains are not defined by lexicons, but by shared stories. New stories come up all the time, while old stories lose relevance or interest. Domain boundaries are therefore both fractal and fluid. You can never successfully pin them down. All we can do is to keep telling each other stories.

Of course, we will often misunderstand those stories, because we come from different domains, and so we will argue. And perhaps poke eyes and call names.

Brilliant communicators can sometimes build bridges across the domains. But such bridges are founded on the shifting sand of stories, so they will not stand forever. Most of the time we have to settle for making the difficult path between domains a little easier for readers to navigate, without fooling ourselves that we can ever make it perfect. That is the price we pay for the economy of language, without which we would not be able to communicate at all.

One thing we might do to reduce the incidence of conflict, is to have a keener awareness of the existence and the shifting fractal nature of domains of discourse, and to ask a little sooner in the course of an argument whether we are in fact both speaking in the language of the same domain. Of course, maintaining such an awareness also reduces the economy of language by introducing more cognitive and conceptual overhead.

So perhaps that leaves us with no cure except to exercise more charity and respect. Not that that takes effort…